I received an aurora email alert from Lancaster University, so I had a listen on 2m. I couldn’t hear any beacons or continental stations.

But I did hear Clive GM4VVX up in IO78 square, in Lairg, some way north of Inverness, who I do not hear usually. I blasted my 10W CW slightly east of North & we worked. He was 55a with me and he gave me 57a. S7 seemed a bit generous, but then he is set up for EME (Earth-Moon-Earth) work.

The Coronal Mass Ejection had shut down the HF bands, but had caused an aurora and opened up other opportunities. As they say, it is a ill solar wind that blows no-one any good!

I didn’t think to look for the aurora by sight, but I think it was the next day, Look North BBC news showed a picture of the same aurora, seen from Stanage Edge, just to the west of here. When my eyesight was better, I could see Stanage Pole from here. Besides failing eyesight, another reason that I cannot see it is that it is not there. Apparently it rotted and fell down or was taken away, some time in 2015. It used to mark a high point on the ancient pack-horse route, the “Long Causeway”, out of Sheffield over Stanage. It was a good landmark to aim for in the snow. 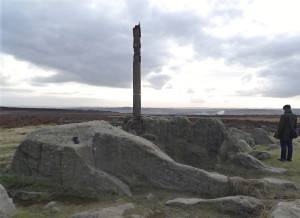