I had an SSB chat with Denis G3UVR on 3cm today. I listened to him on the K3’s little loudspeaker. He videoed his reception of me. I don’t really understand how the signals get to him. My rotator dial said 258deg, which is a bit short of the 266 deg direct path. That may just be poor calibration though.

I listened for John G3XDY, but unusually, I could not hear him. I had a chat with David G4RQI.

I thought two contacts would be it. Then Nick G4KUX came on from the north, a good signal. As thunderstorms crossed the midlands, I found a scatterpoint near Birmingham, to the obstructed south. Tilting the dish up a few degrees to peak the signal, I could hear Neil G4LDR in IO91. We worked using SSB. The sound was a bit mushy, but Q5.

Then I used the same scatterpoint to work Ralph G4ALY in IO70 using CW for a new square on 3cm. So my best DX was via rain-scatter.

I ended with a grand total of 5 contacts. 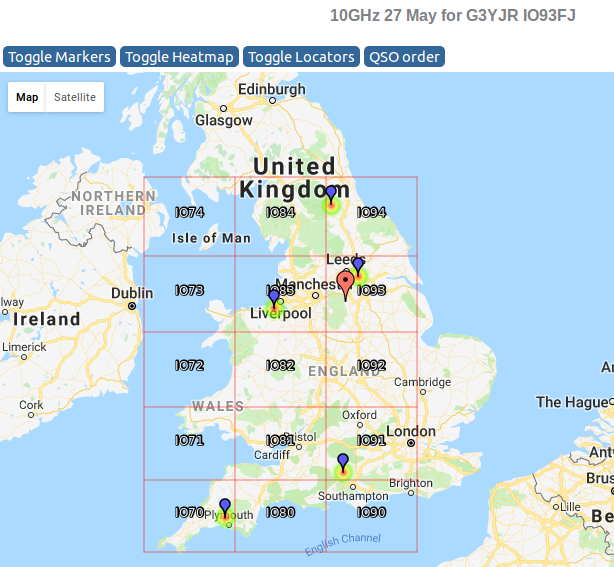 I started on 3cm looking for Mel G8EOP on Scapegoat Hill near Huddersfield. I heard a brief burst from Mel & then lost him. I found Tony G8DMU/P in IO94CB. I worked Denis G3UVR easily on SSB, so conditions seemed quite good.

I was hoping good conditions had persisted since hearing the DB0GHZ beacon the previous day. I messaged Kjeld OZ1FF via the ON4KST website & asked him to beam my way. At first I turned the wrong rotator, but once I turned the dish I found he was a readable signal, if a bit quick on the key. I hope I’ve got him in the log correctly as this is my first contact with Denmark on 3cm & a new band for working Kjeld. It amazes me what an old satellite dish & some domestic plumbing fittings can do.

I tried and failed with Pete G4CLA (who I’ve worked before on 3cm) & G8OHM, who is a difficult direction to the south. The direct path to Mandy M0MDY did not work & I worked her off a reflection to the east.

Nick G4KUX was strong & we could probably have easily worked on SSB, but we completed using CW. 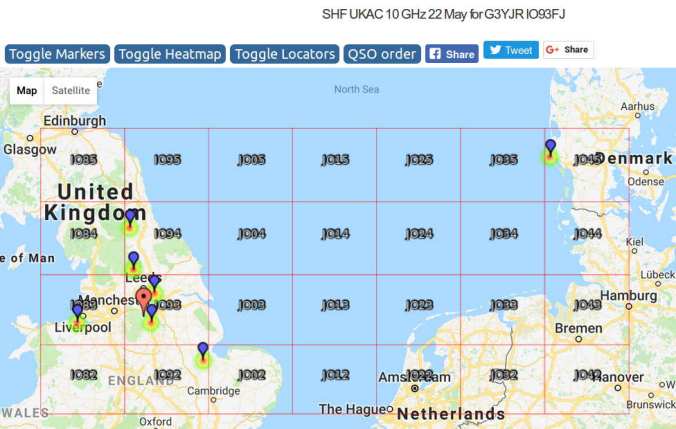 I had to find a transmit fault before I could work this band at the rather late time of 9:30pm local time. I have a lot of bits of cables and connectors what with the 10m IF attenuator, the 70cm IF and PTT control of the K3, Microwave Modules transverter and the SG-Labs transverter. Unplugging things & re-plugging things seemed to sort it. I have a DVM on the directional coupler for forward power from the SG-Labs transverter & this showed about 0.35V, so transmit was working.

13cm seemed harder going. I couldn’t hear the GB3ANT beacon. I tried with Mike G8CUL to the (difficult) south. Aircraft scatter probably gave some assistance. Denis was a CW contact on this band. I managed to forget David G4RQI who I’d worked on 3cm & can usually work on 13cm. Keith G4ODA was a great signal on both bands.

I could just hear Gordon G8PNN, but too weak to work. I failed to hear Jack GM4COX in IO74.

It was way past my bed time when I finished, but before the official end of the contest at 11:30pm local time. 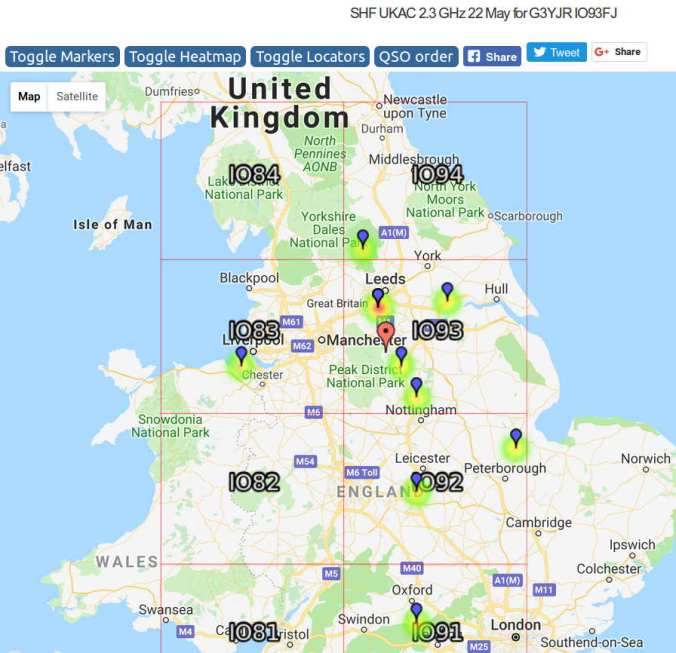 This morning 0630 GMT I heard GB3ANT +48dB over noise (as read on the Elecraft P3), so very strong. Apart from bits of aircraft scatter from GB3ZME, this is the only beacon that I have heard so far on 13cm.

In the evening 2050 GMT I heard DB0LTG on 3cm +24dB over noise. Although I’ve worked stations on the continent on 3cm, this is the first beacon that I’ve heard from across the water. I tried using KST to raise some german stations to talk to, but found no-one.

I expect the good conditions will disappear for the SHF UKAC tomorrow!

I dipped in & out of this contest. There seemed to be something of a lift over the UK, particularly on Sunday, and I worked more squares than usual over the UK. Years ago I used to work Eire regularly using my FT-290, but generally I find stations from the Republic few & far between these days, so it was great to work Mark EI3KD. I worked 9 countries overall.

I was running 4W from the K3’s internal transverter.

Some continental contacts were Rick PA1BVM, Frank PE1EWR, and Helmut DL6YBF. Best DX was Dan OZ1BEF in JO46OE at 755 km. All these were on the key (using morse code). 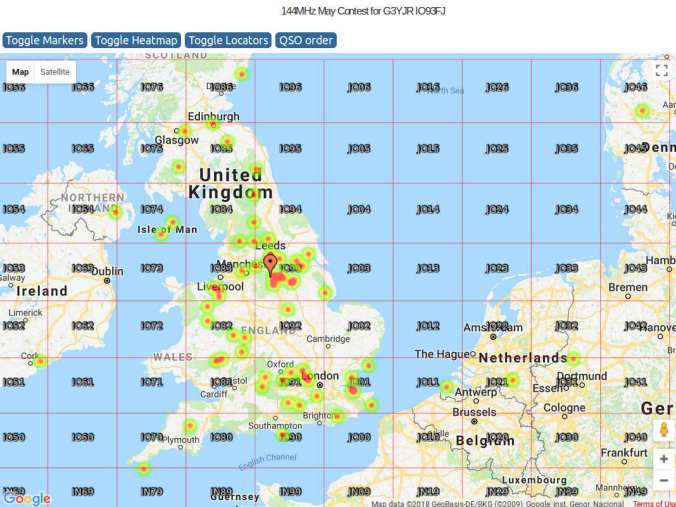 I won a certificate for the highest placed low power entrant. I used 4W. For most of the longer distance contacts I used CW/morse code. 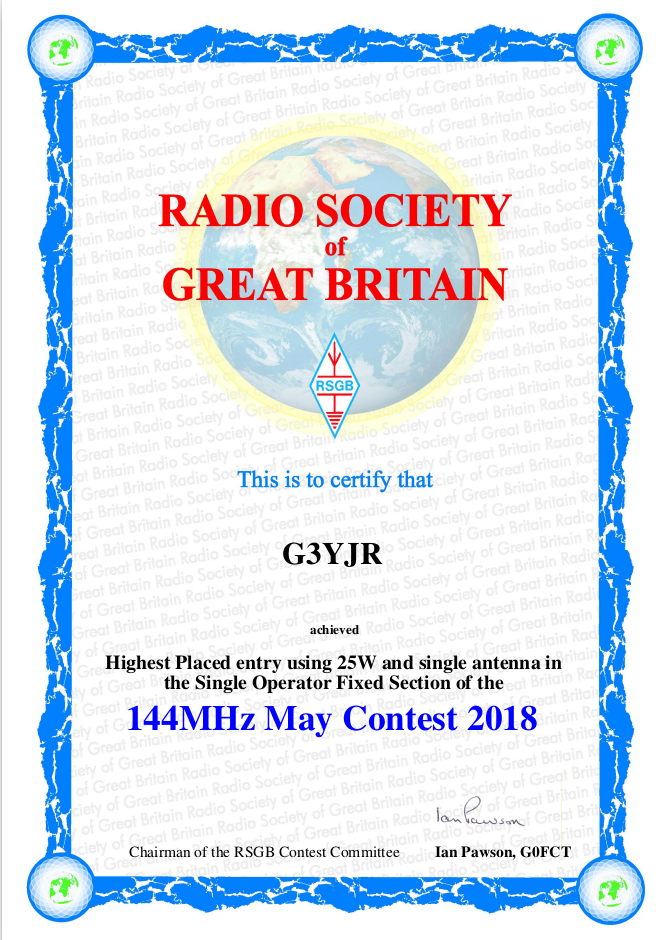 I heard DB0XY again today in JO51EU at 820 km about 25dB above the noise (so maybe about S6 level, including a couple of S points for noise), so some good conditions. I also heard DB0LTG for the first time in JO31TB at 675 km.

On Saturday I entered the 3cm & 70cm Trophy contests. I only got 4 contacts on 3cm, but I was pleased to work Keith G4ODA again. 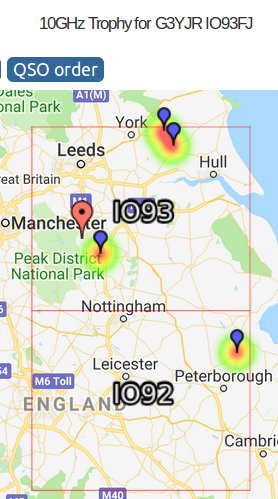 On 70cm, I didn’t hear anyone along the south coast. I worked Conrad PA5Y. 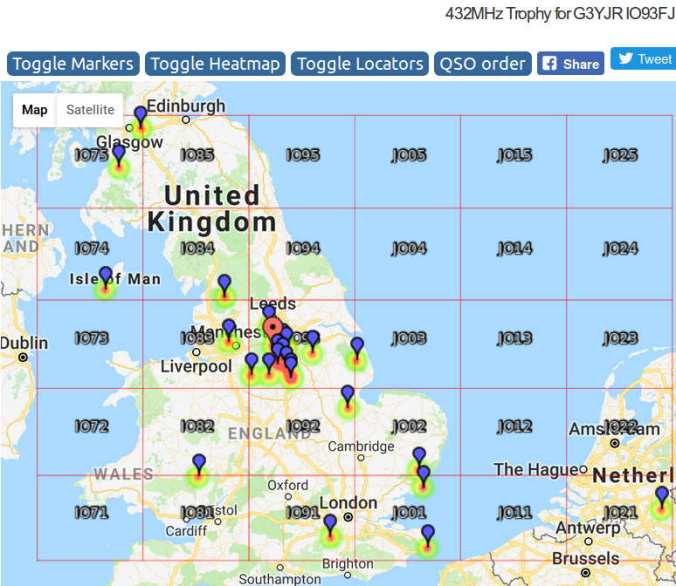 On Sunday I entered the Low Bands contest on 23cm & 13cm. Gordon GI6ATZ was my best DX (longest distance). 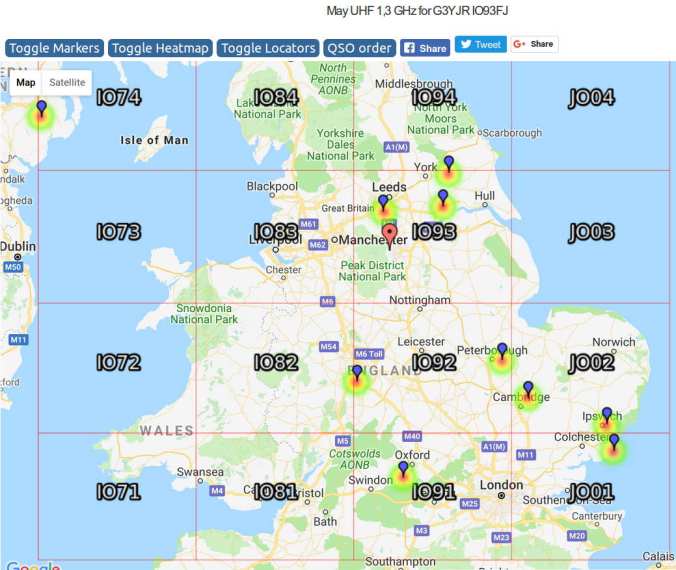 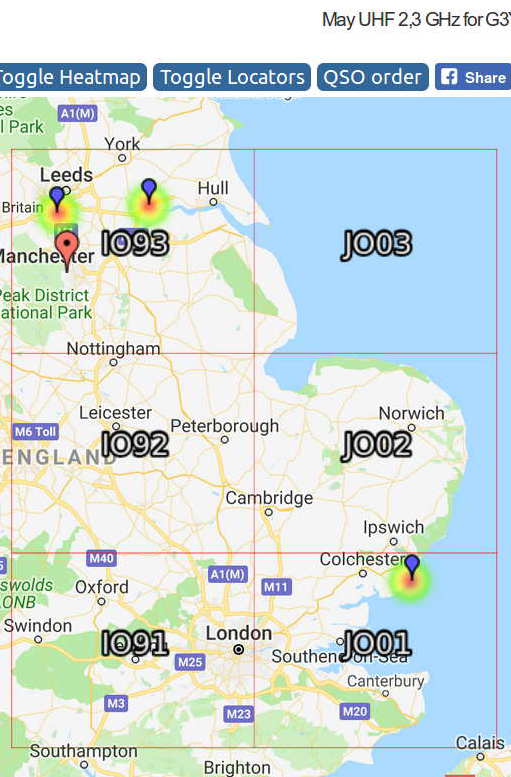 Tonight was a “Show and Tell” night with the Sheffield and District Wireless Society (SDWS) and very interesting it was too.

Every now and then I manage to leave the dash-cam plugged into the lighter socket in the car. I wish the car had USB power sockets plumbed in, but it does not. Over a couple of days, the battery voltage falls to 11.5V or so which is not sufficient to start it.

A fairly simple analogue circuit would fix this. I thought about designing one and then my second thought was to check what might be on offer, ready-made from China. I didn’t find a USB charger with battery discharge protection, but I did find a little board which detects a minimum voltage and trips a relay or detects a high voltage and trips the relay. It cost about £3 including delivery. It arrived a couple of days after my order!

I showed the little board to the SDWS, fed from a pot. I’d wired it to display the input voltage & controlled the voltage from the lithium battery via a pot used as a potential divider. Dropping the voltage to the minimum clicked the relay off and a little red LED went off to indicate this. 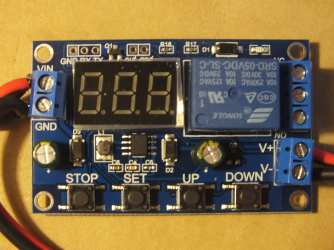 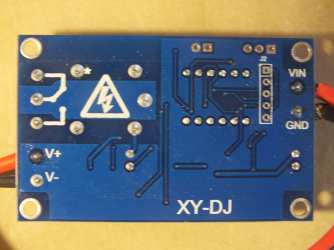 I intend to have an ON button and use the relay as a latch, so that when the battery hits a minimum voltage the relay trips out & isolates the module & everything it supplies, stopping any further drainage. That’s the idea anyway. When I remember, there will be an OFF button that I can press to do the same. The board will feed a voltage-reducing board with USB lead outputs to power car gadgets & maybe charge the odd phone.

The same module could be used to prevent overcharging or allow operation within a range. Programming is via buttons on the board to select the mode and voltages or via hook-up to a computer. The settings appear to be non-volatile.