I thought the MiniTioune  (developed by Jean-Pierre F6DZP) would be a good lock-down/self-shielding project. I had never tried Digital Amateur TV (DATV).

You need to be a member of the British Amateur Television Club (BATC) in order to use their online shop.  I bought:

These items came to less than 60 GBP.

There is a list of parts and a schematic contained in Mike Willis G0MJW’s Notes on building the BATC v2 MiniTiouner. I recommend you follow his advice.

I made a couple of substitutions:

I didn’t find the ferrite bead chokes 28C0236-0JW-10, so I used Wurth 1.8 uH 20% Ferrite Rod Core Inductor, 5A Idc, 6mohm Rdc, WE SD from RS Components. These mount horizontally, but there is plenty of room for them on the board. Probably RS has a direct equivalent if you search for it.

I didn’t find a small board-mount fuse holder, so I adapted one out of the junk box.

I found some nice Panasonic 22uF capacitors with ESR < 0.25 ohm. Some similar Nichicon capacitors had ESR < 0.55 ohm so these should do fine too.

Most of the other components came from the junk box.

I was delighted to find that the MiniTiouner version 2 blank PCB from the BATC is a top quality board, easy to solder and hard to damage.

I set up the DC-DC converter separately on the bench. The tiddly pre-set pot is fiddly to set. I set the output to 3.8V as measured on a digital voltmeter. Surprisingly, another DVM agreed!

Following Mike’s guidance,  I attached the components to the board & soldered them in, but not yet attaching the Serit or the USB daughter-board. With a 13.8V feed, checking the regulator outputs I got 3.25V, 3.23 V and 1.13 V, so all OK. The DC-DC regulator still read 3.8V out. 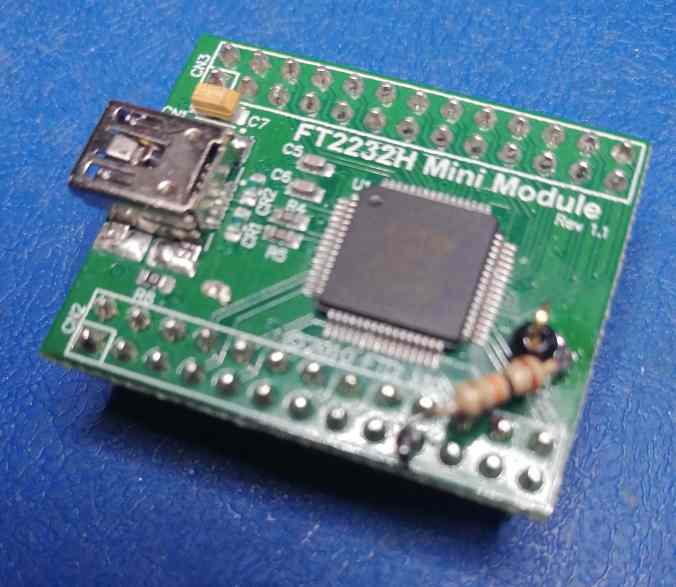 I struggled to find the MiniTioune software, but I eventually found the Telechargement / Download Section and downloaded the MiniTioune V0.9.9.1 .zip file. I had to set up a Windows 10 PC (Win10) especially for this software. Oh for a Linux version!

The MiniTioune Software page says: “run the test programs found in the directory where you extracted MiniTiouner to”. I tried the first one I noticed.

This felt positive. It awarded a green light!I clicked Test NIM. The journal gave a spiel of read/write tests, but counted no errors. Another green light, but only 26% on the I2C performance scale.I clicked Test Digole Master.

Digole Master Init is not OK.

It couldn’t find LAV filters either, so 3 green lights, but 2 red lights. The play buttons were greyed out so I clicked Network: 2 green lights!The MiniTiouner Softwage page said “All tests should pass – if it fails the USRC filter test try running the install_usrc_ax_winXP.exe file in the directory and run the test again”. I ran install_usrc_ax_winXP which finished with the message: DllRegisterServer in usrc.ax succeeded which sounded positive. I re-launched: Check MiniTiouner Driver and Filters V0.4A and clicked USB tuner.

FT2232H has bad device parameters. use FTprog to reprogram it

So install_usrc_ax_winXP might have scrambled the USB card? Time for a cup of tea… MiniTiouner hardware Version 2 says “If you obtained your module from elsewhere or you need to reprogram it it follow the instructions here“. Following the instructions there, I downloaded: FTDI CDM driverThe FTprog software and NIM tuner template.I ran CDM21218_Setup and followed the installation wizard. It installed two drivers:

Next I ran FT_Prog_v3.2.76.375 Installer. A wizard launched. I left the boxes ticked for FT_Prog executable, Create Desktop Shortcut and Templates. It installed & I closed the wizard. I ran FTProg from the desktop icon. It found no FT devices. I tried a better-looking USB cable, re-booted windows & switched the MiniTiouner off & on. One or any of these actions may have helped.

I re-ran Check MiniTiouner Driver and Filters V0.4A. It gave 5 green lights for USB Tuner and Directshow had a green light for usrc filter. So it looks like install_usrc_ax_winXP did do something useful. Maybe a better lead has helped? There was still a red light for LAV filters. I re-tried FTProg with the poorer-looking lead. It found device information. I don’t know what is going on!

I re-tried FTProg with the better-looking lead, intending to proceed on the safe side. It found device information. I right-clicked device 0, selected Apply Template and From File and chose the using NIM tuner XML file. It applied the template. The device 0 Product description says: USB <-> Nim tuner.
I selected DEVICES and Program, clicked the Program button and closed the programmer. Checking settings:

After an internet search I found some CODECS from Cole Williams Software Ltd which I downloaded and installed. This gave me all green lights for the USB Tuner and Directshow tests, so the LAV was now flushed with success! However none of the Play… button video clips worked.

I suspected the NVdia on-board graphics controller was not doing the job when driven by the Basic MS graphics driver. I couldn’t find a Win10 driver for the on-board graphics controller. I installed another old graphics card: ATI Radeon 2400 and routed the monitor to this instead. Somewhere in all this, Win10 decided to update itself for a couple of hours, so I had a lunch break. When it finally finished (and reallocated various file types to MS products and demoted my Firefox browser without asking me – I was reminded why I generally avoid Windows!) I found in Device Manager/Properties/Driver that Win10 had allocated an AMD driver 13/01/2015 version 8.970.100.9001 to the ATI Radeon 2400 “Display Adapter“.

So the on-board NVidia graphics adapter in my HP Pavilion Slimline‘s motherboard did not work with MiniTiounter (MT), perhaps because Win10 didn’t find a manufacturer’s driver for it and loaded a Basic MS Graphics Driver instead. I was lucky that Win10 found a manufacturer’s driver for the equally old ATI Radeon 2400. The reasonably-priced current graphics adapter might be a Radeon 1310, needing only 30W; In the end I didn’t need to try this.

Thurs-21-May-2020. I connected the feeder from the 23cm antenna to the top F connector of the MiniTiouner. I left off the jumper LNB-A2 so that the MiniTiouner didn’t try to feed DC up to the yagi.

I aimed the 44el 23cm Wimo yagi at Lincoln cathedral. I set MT to 1400 kS/s, 1310,000 kHz, 0 offset. Nothing received. Finally I realised that in moving the coax cable that I had disconnected the DC supply to the pre-amp from its usual bias T;  I had forgotten the pre-amp altogether! I put that right. The repeater output came in at -68dB on the  RF Power meter, which seemed good to me. I was delighted to see a picture!

G0KOO accessed the repeater from near Boston. His were the first DATV signals I’d ever received from a radio amateur.

Here is one of the GB3VL Lincoln Repeater images:

The hardest part with MT has been setting up the PC with it’s graphics card, driver and CODECS. But thank you Jean-Paul for making it all possible.